A Day of Red and White

Red and White floods the city as a symbol for Singapore’s independence. The first National Day in Singapore was held at the Padang on 1966. That was the time when the nation had its independence from Malaysia amidst all the challenges that rose from this little country and now it is remembered and celebrated every year. 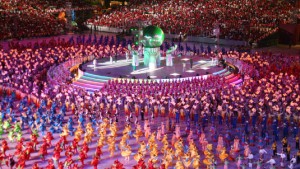 This event is the highlight of all Singapore’s festivities. It does not only celebrate Singapore’s freedom but it is also filled with songs, dances and celebrations! The National Day Parade blows away Singaporeans and even tourists with its wonderful display of fanfare- from marching uniformed organizations in Singapore, to a dazzling show of air force acrobatics and rich stories of Singapore in the form of dance and songs. All of these lead to the central business district where a beautiful fireworks display would light up the Singapore sky.

The Merlion – A National Icon

This year’s celebration was featured by Singapore’s history and the plans for its future. One segment was portrayed as Singapore’s folk stories that were told by the elders. In most stories, the Merlion is featured which is an iconic symbol of the country. The Merlion’s body is represented by a fish which would identify Singapore as a fishing village before, and its head is of the lion which represents Singapore’s Malay name, Singapura meaning the lion city. The Rich History of Singapore

From a small fishing village to a beautiful and progressing metropolitan city – this is how Singapore would always be remembered. The National Day Parade binds Singaporeans together as they make flashbacks and sharing the memories towards history and how Singapore was and is today.

This entry was posted in Latest News. Bookmark the permalink.